Today, we are going to talk about "Seasonal Food in Korea: Traditional Foods Related to Seasonal Customs"

We hope that this information helps you to know traditional culture(heritage) of Korea!

Have you heard of Korean seasonal customs called Sesi? Sesi customs generally reflect agricultural culture and are also called agricultural rituals. This includes traditional holidays and the 24 divisions of the year, which are usually repeated every year. It’s done for wishing and appreciating a good harvest, and traditional rituals, games, and food culture are developed accordingly. This food developed in relation to seasonal customs is called seasonal food.

Spring's Seasonal Food
The representative seasonal customs of spring, which correspond to the first to third lunar months, include New Year's Day, Daeboreum, and Samjinnal.

New Year's Day is January 1 of the lunar calendar, the beginning of the year, and we eat rice cake soup, which means healthy and long life, and Sujeonggwa, a traditional Korean drink.

Daeboreum is January 15 of the lunar calendar, the first full moon of the year, and eats five grains of rice to pray for a good harvest, old vegetables to avoid the heat in summer, and bite on a nut(bureom) with molars to prevent things worse and strengthen teeth.

Samjinnal is March 3 of the lunar calendar, which is said to be the return of swallows who went to Gangnam, and we make and eat hwajeon(flower rice cake), which is known to have originated from events and games during the Goryeo Dynasty.

Autumn's Seasonal Food
Chuseok is a representative seasonal holiday in autumn, which is from July to September of the lunar calendar. Chuseok refers to August 15th of the lunar calendar, the biggest full moon of the year, during the harvest season, and mainly eats Songpyeon and Taro soup.

Winter’s Seasonal Food
The representative seasonal customs of winter from October to December of the lunar calendar are Dongji winter solstice. Dongji is the longest night of the year, which is the 22nd season of the 24 divisions of the year. Dongji is around December 21st and 22nd of the solar calendar and we eat red bean porridge, and it originated from the custom of making red bean porridge and throwing it on the gate or wall to pray for a safe New Year's holiday.

Traditional Seasonal Customs & Present
In traditional society, seasonal customs have been revitalized life. Today's seasonal holiday that seasonal customs are practiced, has been reduced to two major holidays: New Year's Day and Chuseok, but various lifestyles that started with seasonal games or seasonal foods do not only become customs, but also melt into daily life. 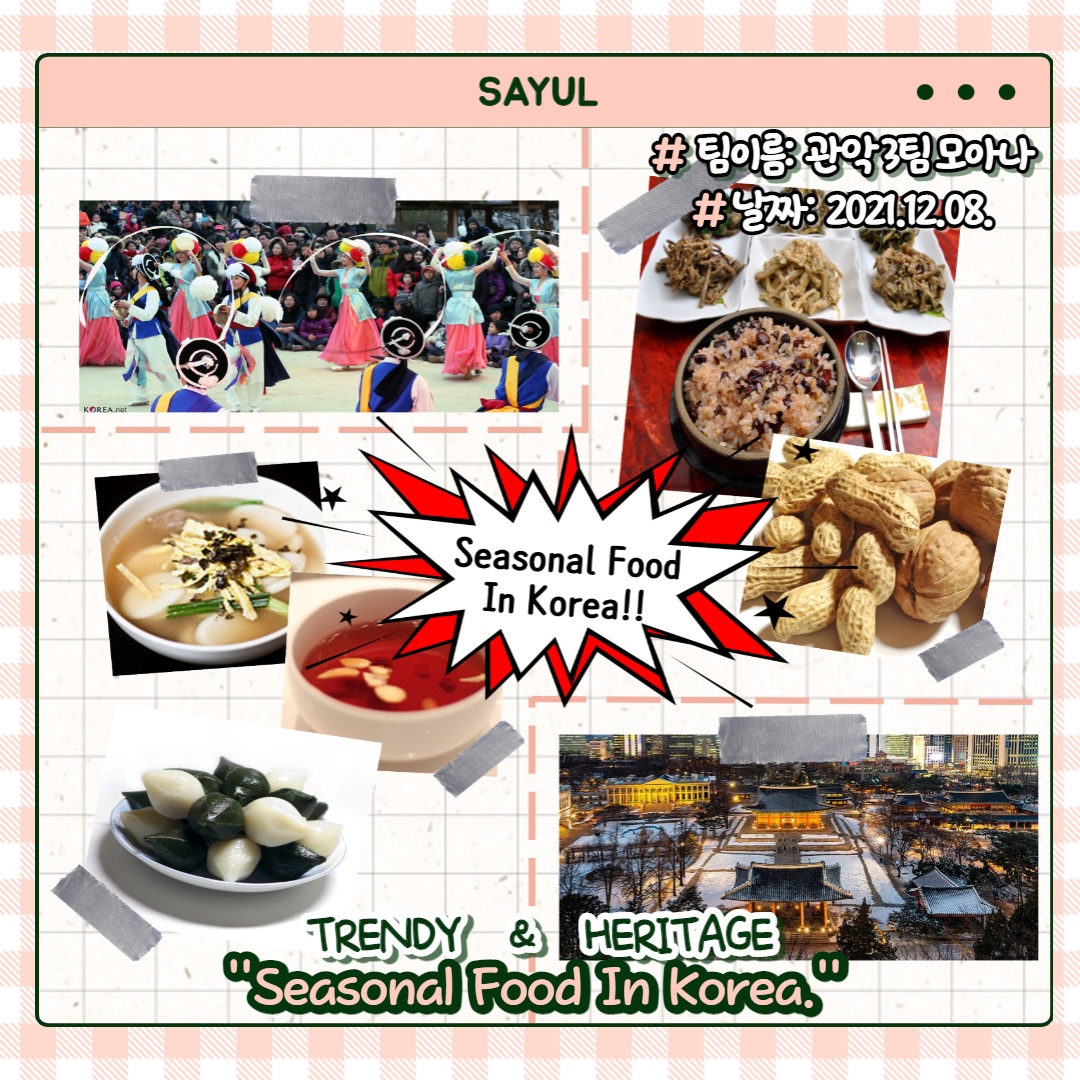