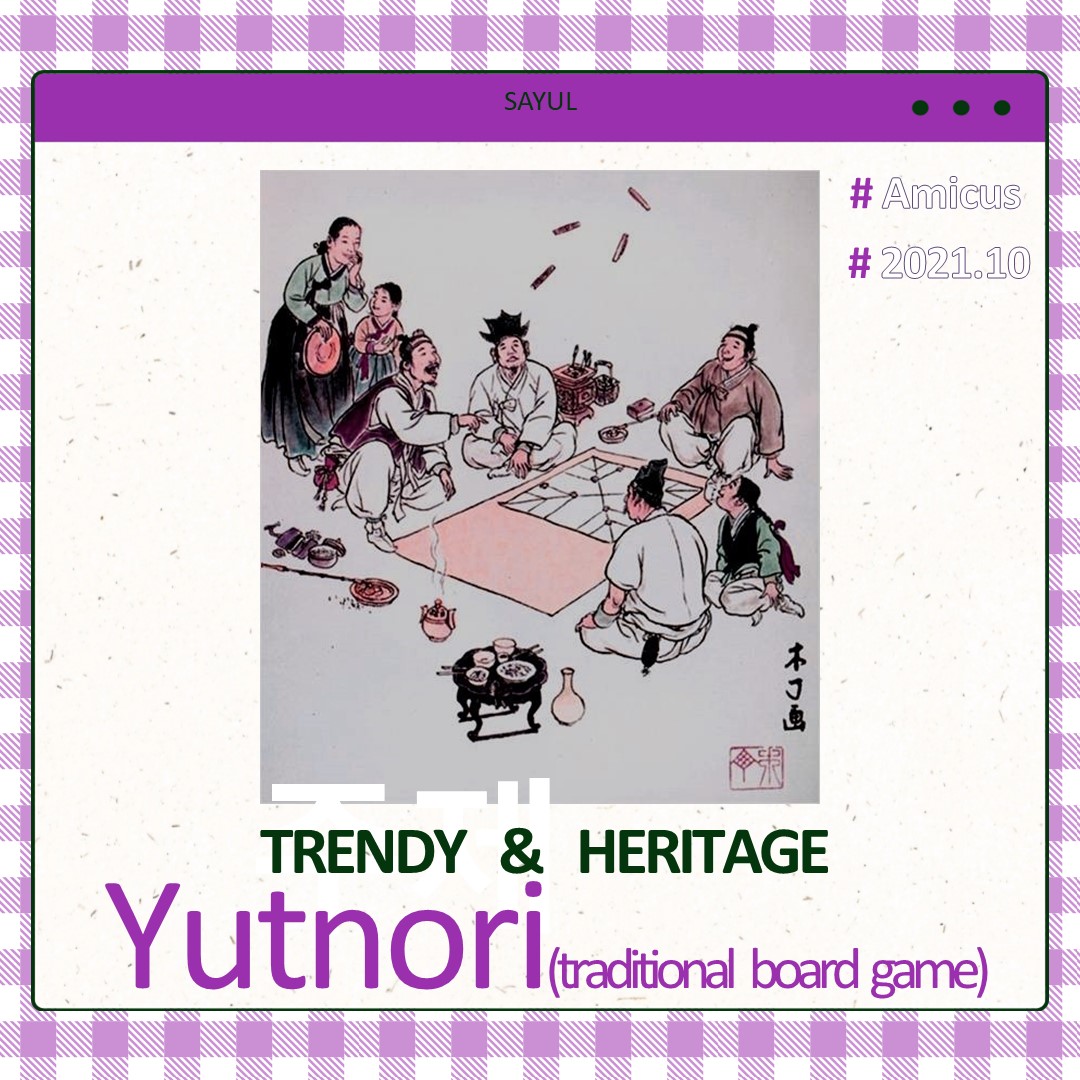 Hello everyone! We are Sinchon Team 1 Amicus. Have you heard about Yutnori game? This month, we will introduce Yutnori to you guys.

It is considered that yutnori started to be performed before the Three Kingdoms period. In the past, the ancestors who relied on agriculture prayed for a good harvest in winter(winter is agricultural off-season) and one of those methods was yutnori. In the first month of the year, our ancestors gathered with close relatives to pray for a good harvest while playing yutnori. A yut board means farmland and moving a yut piece means a change of season. So Yutnori is a game that is played to pray for a good harvest. Nowadays, moreover, yutnori is established as a fun and traditional game. Yutnori is played from the first day to the fifteenth day of the New Year according to the lunar calendar and it is a game of throwing 4 yutgaraks and moving the yut piece according to the result of throwing.

The yut pieces have a name for each. ‘Do’ means the pig, ‘Gae’ means the dog, ‘Geol’ means the sheep, ‘Yut’  means the cow and ‘Mo’ means the horse. Their names are denominated according to the size and speed of the livestock. The larger and faster the livestock are, the more yut pieces can move. There is something called ‘Back-do’ in yutnori. Although there had been no Back-do in the past, it has been newly created in modern times. There is a yut with a specific mark and if the yut with the mark is only turned over, the yut piece moves back one space. Back-do can play a significant role in determining victory or defeat in the game. In the past, the original yutnori was a quaternary game with do, gae, geol, and yut. But it was changed to a quinary game with do, gae, geol, yut, and mo. In the present, it was transformed into a senary game with back-do being added. Moreover, as time passed, there was progression of  industrialization and change in social values. The speculative spirit(the desire to gamble) was developed in this situation and eventually it was reflected in the back-do. This background allows us to understand that the yutnori was also changed as the society experienced changes, though the yutnori started in an agricultural society.

There are 4 cautions in yutnori. First, when the yutgaraks are thrown and one of them is completely out of the board, the turn becomes void and can’t be re-thrown. Second, if your new yut piece reaches to your previous piece that departed on the board, both pieces can move together. But once gathered, those must move together until the end of the game. Third, the team that caught the other team’s piece can throw the yutgarak one more time. The caught piece should be returned to the starting point. Fourth, if your yut piece stops at the intersection of the square’s vertex and midpoint, it can move in any direction(shortcut).

Have you learned much about Yutnori game? We hope you understand Korean culture well through this post. Thanks!