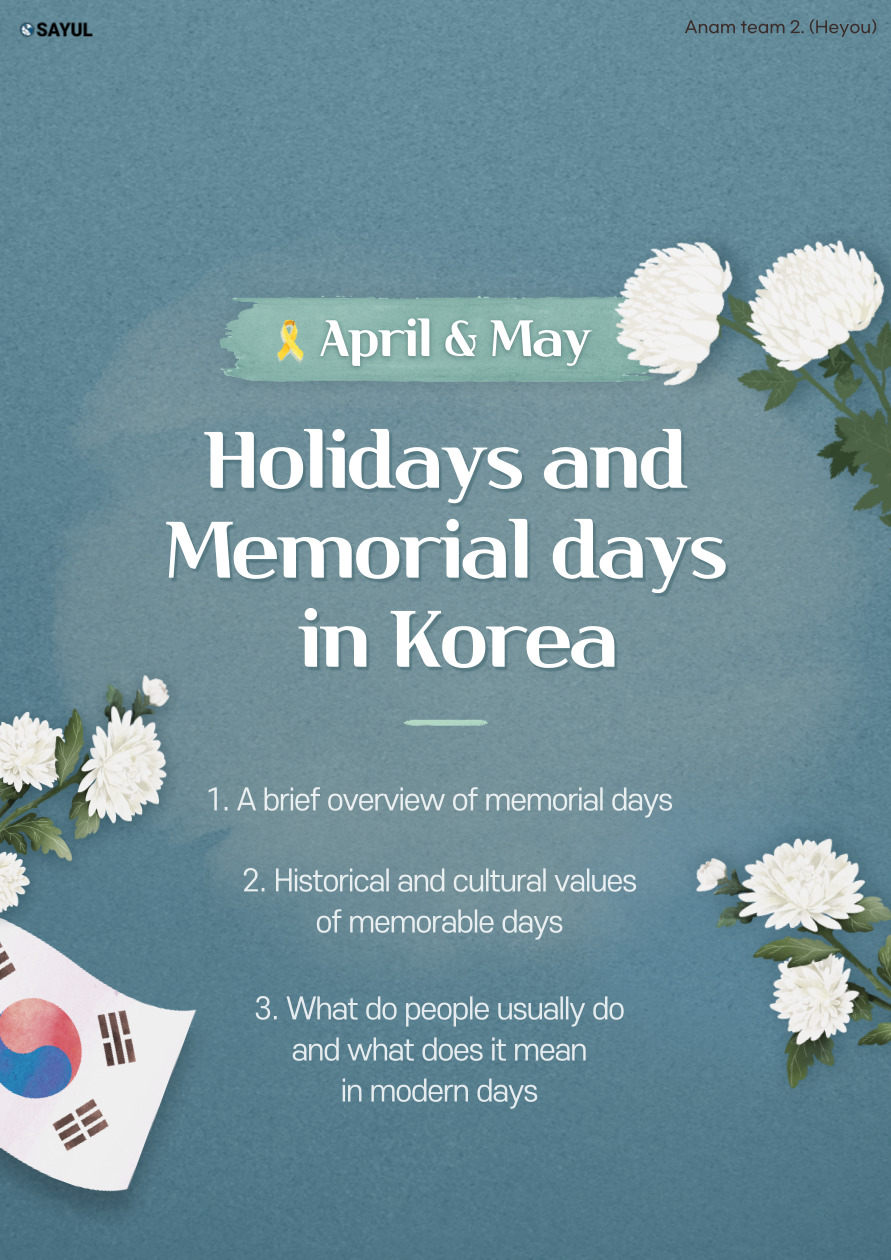 This time we will introduce you holidays and memorial days in Korea. There are lots of meaningful days. On April, we will explain 2 days which remind us of the importance of retrieving democray and the sadness of Sewol Ferry disaster. Regarding May, we will introduce Parents’ day and its unique cultural values related to Confusionism.

First of all, April 16th is National safety day which was established in 2015 to reflect on the importance of safety after the Ferry Sewol disaster on April 16, 2014. The Ferry Sewol disaster is a national tragedy that occurred in Korean modern history, 304 passengers (476 total passengers) died or disappeared in Ferry Sewol, which was heading from Incheon to Jeju, sank in waters near Jindo on April 16, 2014. (total 476 passengers, 299 dead, 5 missings, 172 survivors) Inside the ship, there were students from Danwon High School in Ansan who had been on a school trip, and most of them were not rescued due to insufficient response, which made them more tragically.

Secondly, April 19 is the anniversary of April 19, 1960, the day when people condemned the regime’s dictatorship and demanded fair and free elections. At that time, the Korean government was still quite new, and political corruption and rigged elections were rampant. Angry at the situation, civilians and students flooded the streets to protest against this. Even though the public started as a peaceful protest, the government tried to put it down by force, resulting in a violent clash between the police and the citizens. Many people sacrificed their lives for freedom and the democratization of the country. 4.19 revolution is the day to remember this and thank the ones who made today’s democratic society possible.

Lastly, Parent’s day has a quite different atmosphere that I mentioned above. In Korea, filial piety has been a very important idea since the past, and Parents' Day is a day to thank parents for their kindness and honor the traditional virtues of senior citizens. Usually, people give carnations, gifts, and letters to parents to express their gratitude. It was ‘Mother's Day in 1956 when it first started, but it has been changed to Parents' Day and continues until now.

Q2) What are the historical and cultural values of memorable days in April and May?

A2)   I'll start with National safety day. As you can know at the name of the anniversary, the consciousness of safety has risen dramatically. For example, the current government's "five-year plan for state administration," "a safe society that protects people's safety and lives" has been included as one of the 20 major state affairs strategies Since the disaster, the safety budget has increased by 1 trillion won every year, and the level of response to accidents has increased much more than before.

Moreover, the sense of disaster victim rights has changed. Since Ferry Sewol, the consciousness to protect victims' human rights has improved, and various social discussions, including protecting the rights of victims and bereaved families in all cases, as well as disaster victims, have been triggered. For instance, Ferry Sewol the 4.16 Foundation, which was launched by the bereaved families and citizens of the victims of the disaster, also held an international forum under the theme of Supporting Disaster Victims and Strengthening Their Rights. This perception also influenced the culture and art world, creating films that illuminate victims' human rights such as "The Day, the Sea," "Birthday," "Spring Road," "The Accomplices," and "After Diving Bell."

However, as the government, which is responsible for the disaster and is a kind of perpetrator, became the main body of the accident and compensation, the victims were not able to participate in any process, including finding the truth and asking for support. The Ferry Sewol disaster remains in the hearts of the people as the scars and shocks of modern Korean history.

Next, April 19 Revolution Anniversary. The first historical value of the April 19 Revolution is the anti-government, anti-dictatorship, anti-denial movement. Civilians and students contributed to the establishment of a new government by fighting against the rigors and injustice of the Lee Seungman government, which was the reason the March 15 election arose.
Secondly, the revolution from the below. As I mentioned above, it's a revolution by students and citizens. Protests against illegal elections in Masan, the trigger of the April 19 revolution (the April 19 revolution was triggered by the government's cruel crackdown on anti-election protests in Masan), and the April 18 protests by Korea University students were led by both students and citizens. This is a truly democratic revolution that is opposed to the coup, a power change between the ruling forces, in which a few soldiers illegally take power.

Thirdly, the nonviolent civil revolution The April 19 Revolution was made by marching peacefully, calling for the resignation of dictatorship and the protection of democracy. The local protests that were the prototype of the April 19 were all conducted with peace marches and slogans. Lastly, it is our first successful revolution. The change of government was carried out by April 19 in the democratic process. However, the dictatorship was re-established by the military regime on 5.16 because of the conflict between political interests and the people’s lack of awareness of democracy.

Parents’ Day is the national anniversary to respect for elders and remind us of filial duty. In fact, Parents’ Day is a part of the Western culture, and Korea has accepted the day while receiving the Western religions and cultures. Since Korea has long been a Confucian country, it valued filial piety so it merged with Western Parents’ Day naturally. Nowadays, Parents’ Day makes us reflect on what do our parents mean to us. Also, as it is more difficult for families to gather together in a nuclear family society, it is becoming a day when they get together and harmonize with families. So, on Parents’ Day, Koreans give gifts to their parents or go on a trip with them. We will explain the details below.

Q3) Then on these days, what do people usually do and what does it mean in modern days?

A3)   First of all, on 4.16, we remember the disaster through a yellow ribbon with the phrase "one movement is a great miracle" and reflect on the past days when we were ignorant of safety. The yellow ribbon[1] campaign started with the hope that the missing people would return safely to their families during the Ferry Sewol disaster. It is meaningful that this event can be remembered without being forgotten in people's hearts through the Memorial Day of the Sewol issue. As I mentioned above, April 16 is National Safety day, so there are some events to raise the level of safety awareness of the people. Recently, each local government holds various safety events or provides disaster safety education through VR experience events.

[1] a symbol to wish for the safe return of those on the battlefield.

The most important modern meaning of the April 19 Revolution Day is that the people always remember that the power of democracy comes from the people. There was a period of military dictatorship even after the April 19 revolution, but democracy was regained by the May 18 Gwangju Democratization Movement and the June Democratic Uprising, following the April 19 revolution. Most recently, the candlelight of the people once again raised democracy in the Republic of Korea, which was stranded due to the influence-peddling. Democracy in Korea does not only remain in the letters in the Constitution but is a living spirit so far.

The 4.19 Revolution National Cultural Festival of Gangbuk-gu Office, where the 4.19 Democratic Cemetery is located, is representative of the 4.19 Revolution National Cultural Festival. During the event, students of various ages, ranging from elementary school students to college students, will participate in various competitions related to democracy, including English speaking, drawing, writing, discussion, and pansori. Besides, various events such as the Rock Music Festival, the 4.19 Revolution Ceremony, and the International Academic Conference are being held.

On Parent's Day, parents and children gather to celebrate the grace. Offspring give carnations and gifts to their parents and the whole family gathers and have a great time. Today, people often go on a trip together. As for government-related events, the government selects and rewards exemplary families, parents, and children to encourage the meaning of filial duty. Local governments also encourage respectful minds through family singing contests, sports competitions, publication of case books for filial piety, etc. to have family blessings.