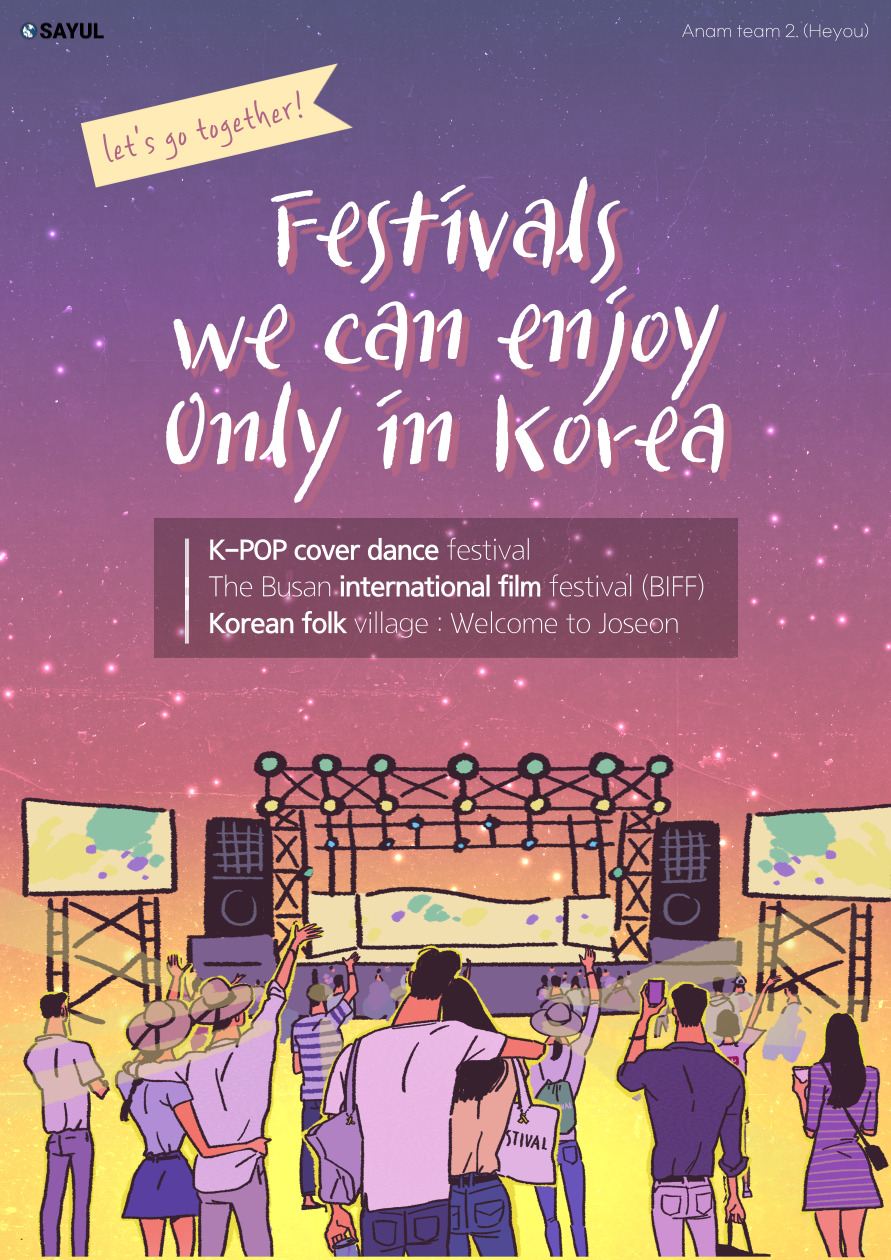 Festivals We Can Enjoy Only in Korea

Hello, we are team Anam 2, Heyou! This June, we are going to introduce 3 fascinating festivals to enjoy. The most interesting part of the festivals is that you can participate in them only here, in Korea. Let’s explore what festivals are waiting for you!

Q.1 I’m a big fan of K-POP and I took many cover videos! What kind of festival I can participate in while staying in Korea? 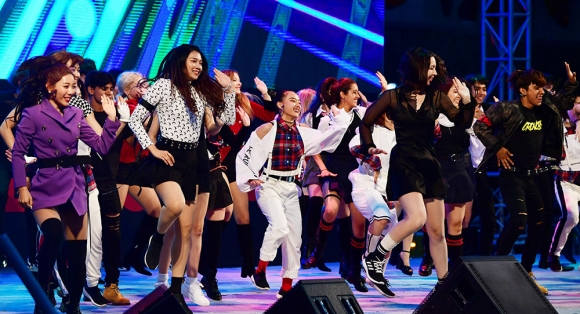 The K-pop Cover Dance Festival, sponsored by Seoul Newspaper, is a K-pop fan care campaign aimed at communicating and sympathizing with Hallyu fans around the world. It has been held every year since 2011. During the festival, K-POP fans can become their favorite idol singers. The fans cover the performances of K-POP idol singers. Not only the fans cover the performances and facial expressions of the singers, but they even dress up the same stage costumes the singers wore. In 2018, 3,140 teams from 65 countries, including Mexico, Spain, the United States, Russia, Indonesia, Thailand, Japan and Hong Kong, participated the festival.

The campaign is considered to contribute to the continuous spread of Hallyu culture by creating the chance for intercultural understanding. Since K-dramas has gotten popular, fans who are interested in various kinds of Hallyu and Korean culture has been sky-rocketed. In response of the tremendous love, Korea has created K-POP cover dance festival. Offering the fans participatory K-POP activities, Korea tries to maximize intercultural interaction. BTS introduced K-pop to people all over the world and supported the K-pop Cover Dance Festival, a campaign for the sustainable growth of the Korean Wave.

However, the K-POP Cover Dance Festival (KCDF) in 2020 encountered a crisis in holding the festival due to the COVID-19 outbreak. Despite COVID-19, KCDF cleverly overcame the problem opening online festival instead. Until the first week of September, coverdancers around 70 countries applied for the festival. 13 cover dance teams from 13 countries which passed preliminary matches competed on virtual stages.

Since the K-pop Cover Dance Festival (KCDF) began, winning teams from all over the world have been invited to Seoul every year, but this year, the festival will be held only in online due to the COVID-19 pandemic. 2021 K-POP COVERDANCE FESTIVAL Round 1 is scheduled for September 5th, Round 2 is scheduled for mid-October, and Final Round is scheduled for November. For participation applications, follow the instructions prepared after joining the homepage and fill out the application form along with the registration of the video registration.

As we already said before, the biggest advantage of the Busan International Film Festival is introducing new and popular Asian films. Among the first screenings by Asian film directors, the New Currents Award, the Peace Prize, and the Net Pet Award are awarded. In addition, visitors can enjoy various movie-related experiences such as learning about the history and masterpieces of Korean films and appreciating the works of non-Asian directors. Besides, there are various events such as open talk, GV, which are a venue for filmmakers, actors and the public communicate with and outdoor screening that audiences can watch the film outside. All events can be booked online and purchased on-site both. It’s held every fall (between September and November) andindoor events are usually held at the Busan Film Center, but outdoor events change depending on the situation. It was also held from October 21 to 23, 2020, but various programs such as open talk session, outdoor events and after parties were canceled under the quarantine guidelines.

However, due to the COVID-19, various events, including the opening and closing ceremonies, and overseas invitations were canceled, and all open talks and stage greetings that could attract audiences were suspended. Most of the time, it has been converted to online, with Asian Content & Film Market, Asian Project Market, Forum BIFF, and various Asian Content Awards being held online so, the festival canmeet more audiences. The offline event was focused only on movie screenings and only online reservations were available.This year, the event will be held between 6th October and 15thOctober and applications for official screenings are currently underway.

Q.3 I want more traditional festival. I heard that oncein Korea there was Joseon Dynasty. Is there any wayto experience the Joseon Dtnasty?

<Welcome to Joseon> is a festival that can only be found in Korean Folk Village. The Korean Folk Village was established to introduce traditional culture of Korea to domestic and foreign tourists by bringing together the customs of our culture that have been inherited over a long period of time. The village of the Joseon Dynasty, which is the background of the festival, is a real house that has been reconstructed and restored in the actual regions. Various hands-on exhibitions held in the Korean Folk Village have traditional significance in that it shares the value of forgotten traditional heritage. In particular, it sheds lights on the traditions of the Korean people's lifestyles that remain in every corner of modern life, not as old relics. It opens a new world of Korean tradition with a more pleasant and vivid way so that traditional culture can shine in the world.

In this festival, visitors can have various experiences related to Korean traditional culture. This time, the main event is madanggeuk named “Satto’s Birthday Party”, a story of the good and evil. This year's Sato's birthday party is expected to be a big feast because a special guest observer will visit.People in folk villages held a "Korean General Assembly" madangeuk which informs visitors the contents of the birthday party and gives opportunity to people to get VIP tickets for Satto’s birthday party.

This 'Welcome to Joseon' event will be held from April 3 to June 20. The ticket is 25,000 won for an adult and 30,000 won for one day pass. However, it is 17000 won for those who wear Hanbok and 18000 won for those who live nearby or for birthday person. Entrance tickets are available for facilities such as folk villages, traditional folk halls, world folk halls, regular performances, while one day pass is available for facilities such as amusement village attractions in addition to all the benefits of entrance tickets. Also, you can rent audio guides for traditional houses, exhibits and events offered in Korean, English, Chinese and Japanese for 2,000 won. And there are more festivals after this, for example, from June 19 to July 11, a Dano event will be held to pray for abundance and prepare for a hot summer after planting, followed by "The Year's Rural Summer" and "Joseon Hajiroda" events in July-August.