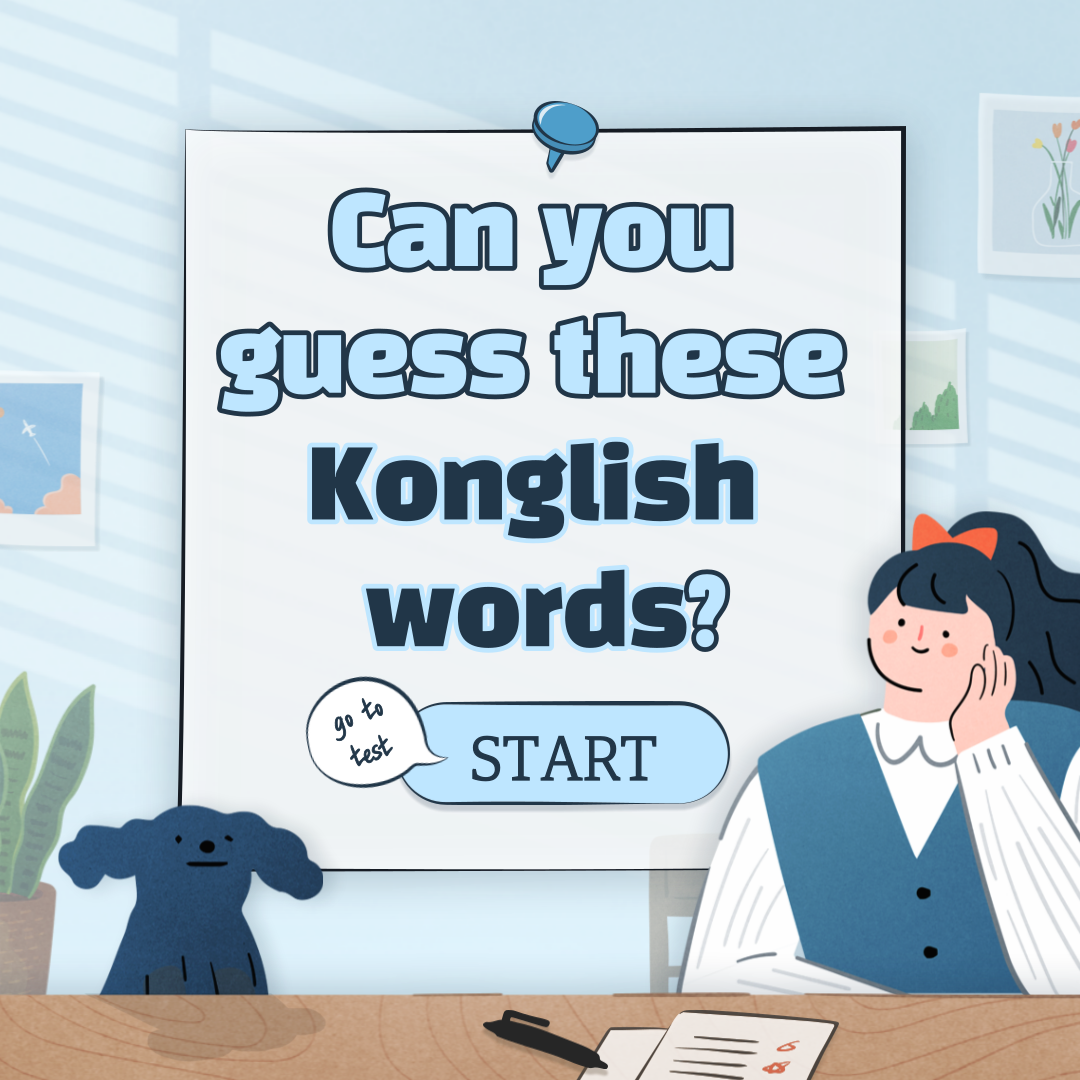 Selfca (셀카), skinship (스킨십), apart (아파트). Can you guess the meaning of these words? Most foreigners, including people who use English as their first language, would probably have difficulty understanding them. The reason is that these words are Konglish (Korean + English), Korean style English. Konglish is defined as English loanwords fitted into Korean. These words sound like English and borrow English expressions, but are used in ways that are incomprehensible by native English speakers. The three words above are good examples. As Konglish is used very often in daily conversations, knowing them will help your communication in Korea.

Q1. How and from where did Konglish originate? How was it made?

Konglish is a Korean-style English language established in the daily lives of Koreans. Well, how did they start? Yes, there may be a lot of factors that helped create Konglish terms, but we would like to tell you four main reasons.

First, Konglish originated from the idea or pronunciation of Japanese English expressions. In Korea, Japanese-style English is often hardened into Konglish due to the Japanese colonial era. Second, words that occurred after the Japanese colonial period were transformed into various forms, such as reducing long words to ease their use, and became Konglish today. Though it started in Japan, Konglish now became a natural cultural phenomenon in Korea. We can say that it shaped a new part of Korea. Also, people sometimes tend to apply Korean grammar to English words. It can also make Konglish words.  Finally, we can talk about the development of trade and advertising. This means a specific product can be used immediately without changing its name to Korean.

For these reasons, the English expressions Koreans commonly use are bound to differ from the English used by foreigners.

Q2. Can you give some examples of Konglish words and explain how or why those words are created that way?

How would you order a hamburger at your favorite fast-food restaurant? Most foreigners will say, “I’ll have a cheeseburger meal/combo”. But in Korea, we say ‘set’ instead of ‘meal’ or ‘combo’. To give you a tip, you can either order only a burger which is indicated as ‘단품(single dish)’ or order a combination of a burger and other side menus which is indicated as ‘세트(combo meal)’. Koreans may say, “I’ll have set number two”, “Please give me the cheeseburger set” or “I’ll have a bulgogi burger 단품 with cola”. Also, I’ve heard that some countries call Coca-Cola ‘coke’, but in Korea, everyone says ‘cola’. Knowing these Konglish words will definitely rescue you from situations of misunderstanding and successfully get you the menu that makes your stomach grumble!

Have you ever heard about or seen a one thousand dollar notebook? In Korea, it’s quite common. Don’t be surprised. It’s because in Korea laptops are called ‘notebooks’ due to the fact that most portable laptops are about the size of a notebook. In fact, the word ‘notebook’ was the official name of a computer model first launched by Toshiba Corporation, which led people to naturally use the word notebook to refer to a laptop. With this advice in mind, next time ask your Korean friends which ‘notebook’ models they use instead of using the word ‘laptop’!

Those of you from land-rich countries must have been surprised by the vast number of apartments when you first came to Korea. However, instead of using the word ‘apartment’ or ‘flat’, in Korea, we say ‘apart(아파트)’. This Konglish word is used as a shortened version of apartment, making it more convenient in terms of pronouncing and writing the word. To give you a tip on pronouncing the word ‘아파트’ itself, it will be easier to understand if you keep in mind the Korean alphabet, Hangul. In Hangul, there isn’t a letter that uses the ‘r’ pronunciation so there is no ‘r’ sound in the word ‘apart’ when pronouncing it in the Korean way, even though there is an ‘r’ indicated in the word itself. Next time you visit a friend’s apart, don’t forget to type ‘아파트’ instead of ‘apartment’ on your Google Map!

It means the interaction of affection through the interaction of the skin. Frankly speaking, skinship can be used in two different situations. First, It means light physical contact. This applies to physical affection that confirms affection in a family or friendly relationship. For example, holding hands, hugs, pets, and kisses between a mom and a baby. Next, it sometimes means physical contact that confirms the love between men and women. Do you know the correct English word for skinship? It’s ‘physical affection(or public display of affection)’ or ‘touching’. Actually, 'Skinship' is a combination of the English word 'skin' and the suffix 'ship'. The suffix 'ship' represents a state or characteristic, as in a friendship or a relationship. It began to be used by a Japanese child psychologist in the 1950s and spread throughout Japan, and later spread to Korea.

I guess you would take a self-camera at least once a week. Self-Camera means taking a picture of yourself. Or a picture was taken like that. For example, ‘I save my favorite celebrity's self-camera (selfie) on my mobile every day.’, ‘My friends told me I'm not good at taking self-camera.’ The correct English word for ‘self-camera is ‘selfie’. 'Selfie' is a combination of ‘Self’+’Camera’. Also, it’s a combination of the words ‘self’ and ‘kawaii(깜찍)’ in Japanese. There is a related Korean word like Selgikkun(셀기꾼)' which is a combination of 'selfies(셀카)' and 'cheaters(사기꾼)' and means a person who always looks better in pictures.

Languages transform as they fly around different regions. Konglish, a Korean-style English with its long history, is now an indispensable part of Korean culture. Therefore, understanding the context of where it came from is very important. Hopefully, readers get to use some of those Konglish examples during their journey in Korea. Thank you.