3. Short Explanation: About how South Korea combatted with Covid-19

3. Short Explanation: As a part of the Wikipedia task, I uploaded an article on Korean Literature in Wikipedia Bangla! I hope all of you are doing well through these tough times. Love and courage to everyone.

After getting approval from SAYUL Korea for a special movie screening event, we had a discussion with Mr. Kim Jin Gap, Officiating Secretary of Korean Culture and Language Center, Kolkata, regarding the sponsorship of the event.

We held our first off-line meeting of this session to discuss and set up a detailed plan for the event after the finalization of the sponsorship.

We discussed about our idea of organizing a special congratulatory screening for the Academy award winning movie, 'Parasite' (기생충). We decided to invite Korean guests, Korean language students, other SAYUL teams along with their friends and family, and educational institutes. 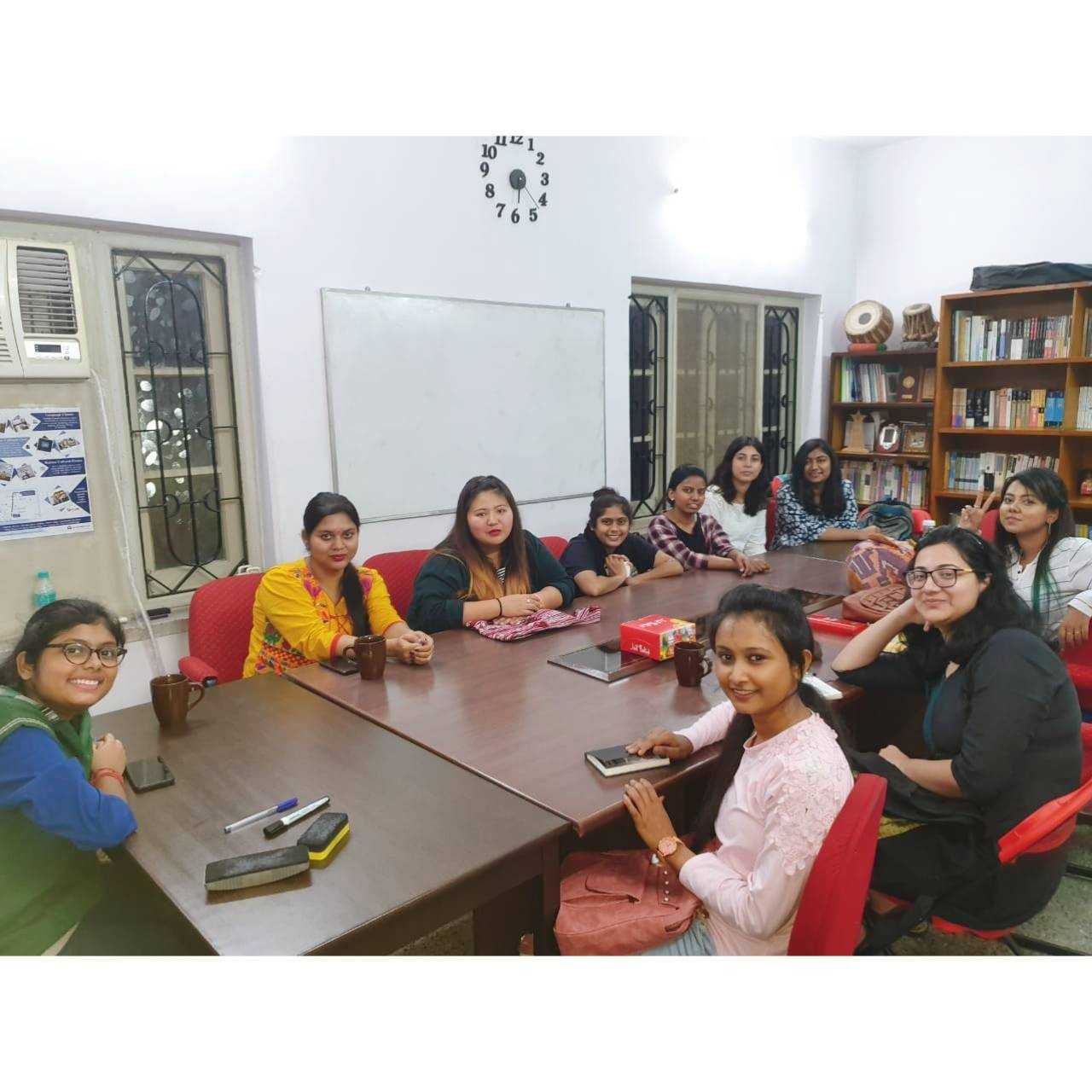 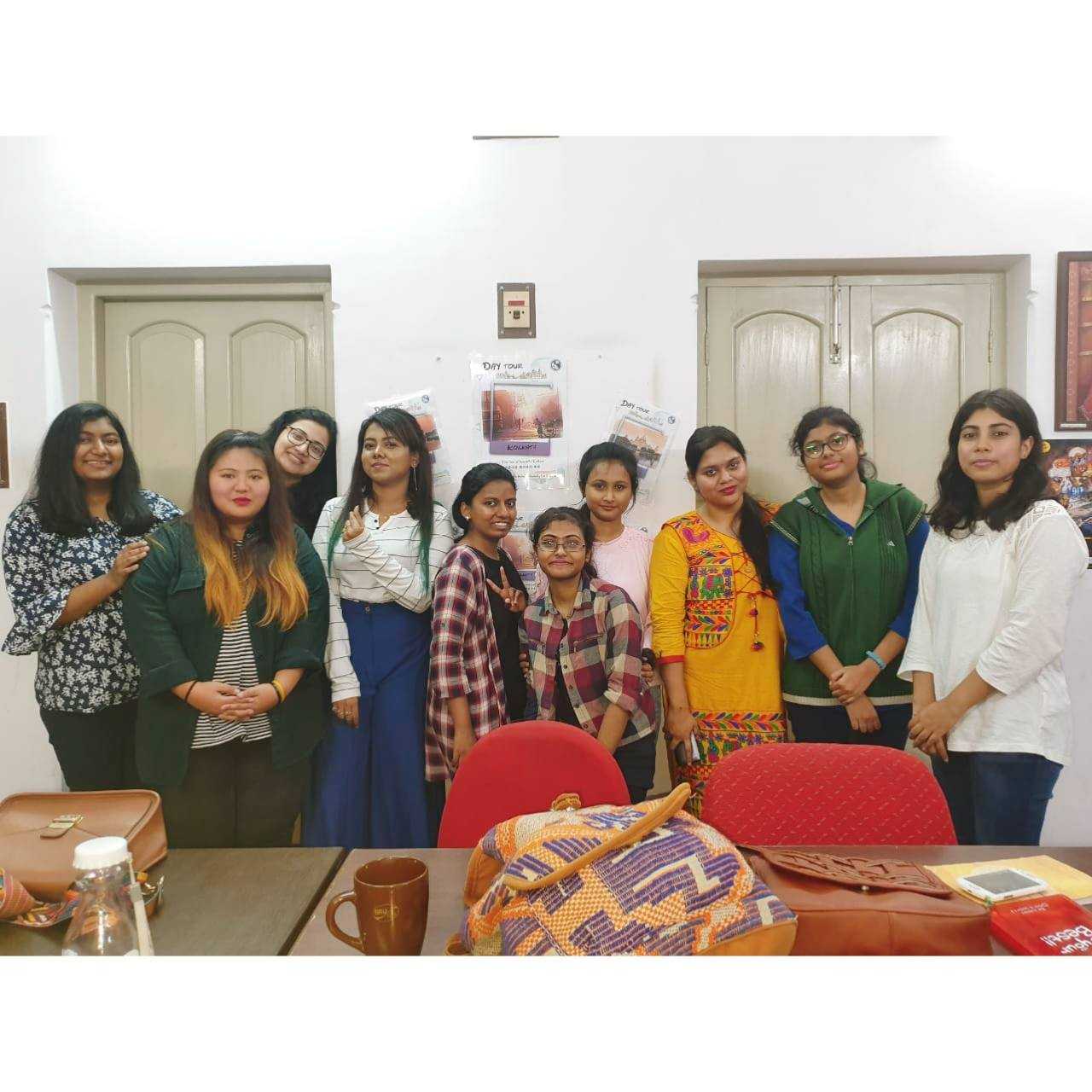 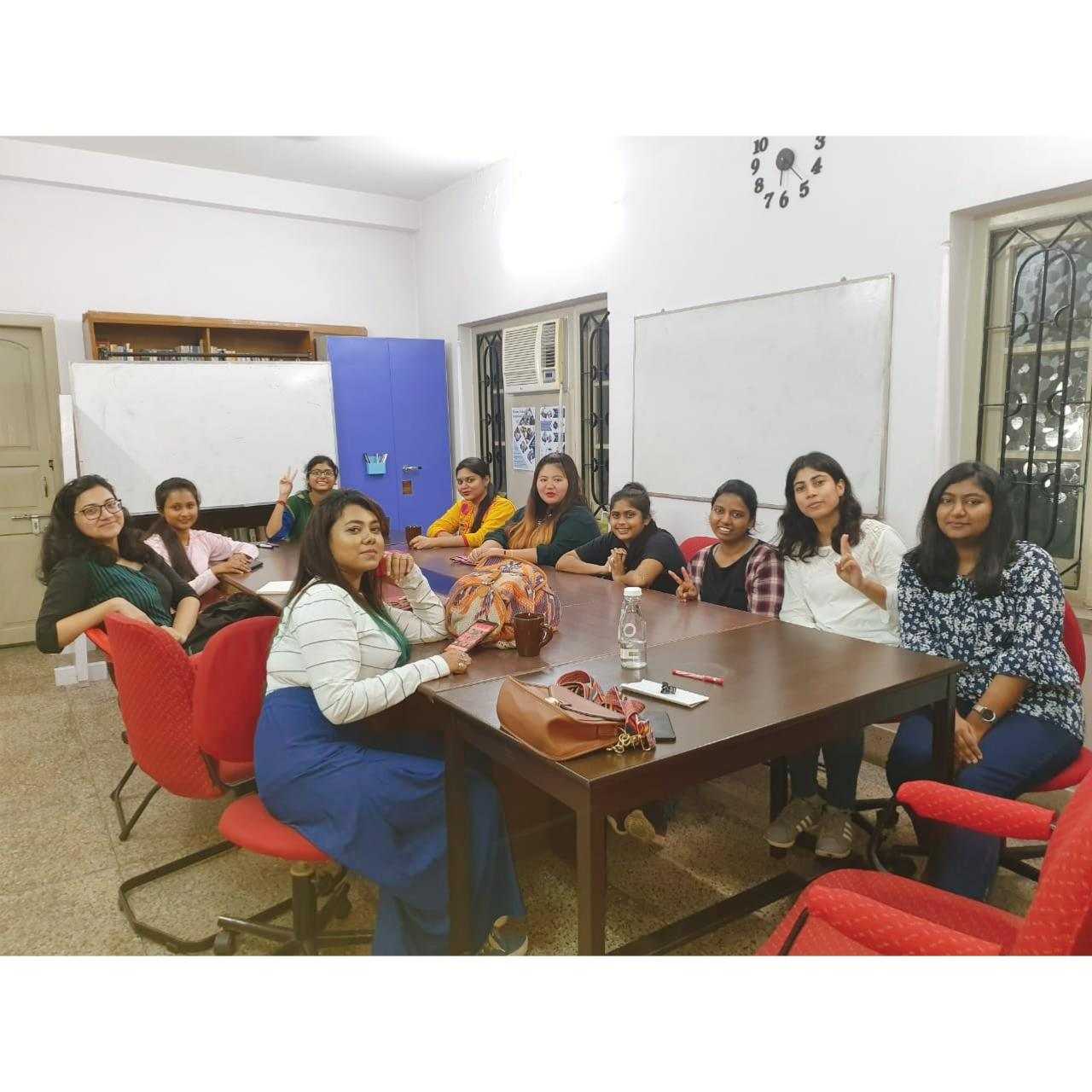 Participants of the trip:

Summary of the trip:

On 6th December’19, SAYUL in India Team I organized its first Cultural Exchange Trip to St. Paul’s Cathedral and King’s Bakery. St. Paul’s Cathedral was our first destination of the day. Acknowledged as an ‘architectural treasure’ on the land of ‘City of Joy’ Kolkata, St. Paul’s Cathedral was built in the Gothic revival style (Indo-Gothic design). It was the first Episcopal Church of the Eastern world. The overall structure resembles England’s Norwich Cathedral with three Gothic stained glass windows and two frescoes in Florentine Renaissance style and the tower is modeled on “the Bell Harry” tower of Canterbury Cathedral.

The trip commenced at 10 a.m. as all the SAYUL members and Korean guests gathered in front of the entrance gate of the Church. Everyone partaking in the trip had the opportunity to witness a procession of and for the Specially Abled Children supported by the Cathedral. A brief on St. Paul’s Cathedral was given by SAYUL Leader, Ms. Shirsha Singh, in Korean to the visiting guests and then all the participants proceeded towards the Church. Everyone prayed together under the same roof and experienced the essence of peace and tranquility of the Church.

Around 11:20 a.m., all the members and the Korean guests moved to the next destination that was the 2nd Outlet of King’s Bakery. It is the very first Korean Bakery in our town serving traditional Korean dishes and confectioneries. Food is an important part of cultural identity which opens a window for cultural exchange. Cooking traditional food is a way of preserving one’s own culture in new places. Both the SAYUL members and the Korean guests relished the unique Korean experience away from Korea. As a friendly gesture, SAYUL members treated the Korean guests to lunch and vice versa. And the trip concluded with a happy, gratifying, delicious meal.

The Activities on the trip:

On 7th September 2019, KCCI & KCLC sponsored the Korean Cultural Day in Kolkata which focused on promoting and imparting the knowledge about Korea & its culture. The event was held in the premises of Baptist Missionary Society, Kolkata from 2 p.m. to 5 p.m. and was attended by 250 people approximately, including the students of KCLC, Ramakrishna Mission Institute of Culture and Hosanna Taekwondo Club. KCLC Kolkata organized the event along with the active participation of the members of SAYUL Team Kolkata under the leadership of Ms. Shirsha Singh (Team I) & Ms. Baishakhee Chakraborty (Team II), Hosanna Taekwondo Club and King’s Bakery (Korean Bakery in Kolkata).

The three hours long program comprised of presentations on SAYUL in India, Trip to Korea, Korean Cuisine, Korean Beauty & Skincare and Introduction to Korean Language Institutes & Test of Proficiency in Korean (TOPIK). The brief on SAYUL in India was about its introduction, purpose & objectives, and its role in promoting culture exchange between the two countries. The event also consisted of thrilling performance by the students of Hosanna Taekwondo Club, a small K-pop Song & Dance Cover Contest, Quiz Contest both for Korean guests and the attendees, and concluded with a Lottery draw.

Refreshment packs under King’s Bakery were served to every attendee as well as a small K-food stall was organized for K-food lovers.

Everybody enjoyed the event and highly appreciated the organizers. The event revealed many aspects of Korean culture before the audience.

SAYUL members not only just participated in presenting various programs but also volunteered and worked hard behind the curtain for weeks to make the event possible.

The event was entirely organized under the guidance and support of KCLC Officiating Secretary, Mr. Kim Jin Gap (Head organizer).

Short Explanation: Great Teamwork Can Make Anything Possible: Learning the Preparation of  Korean Dish and Enjoying Movie Day at KCLC 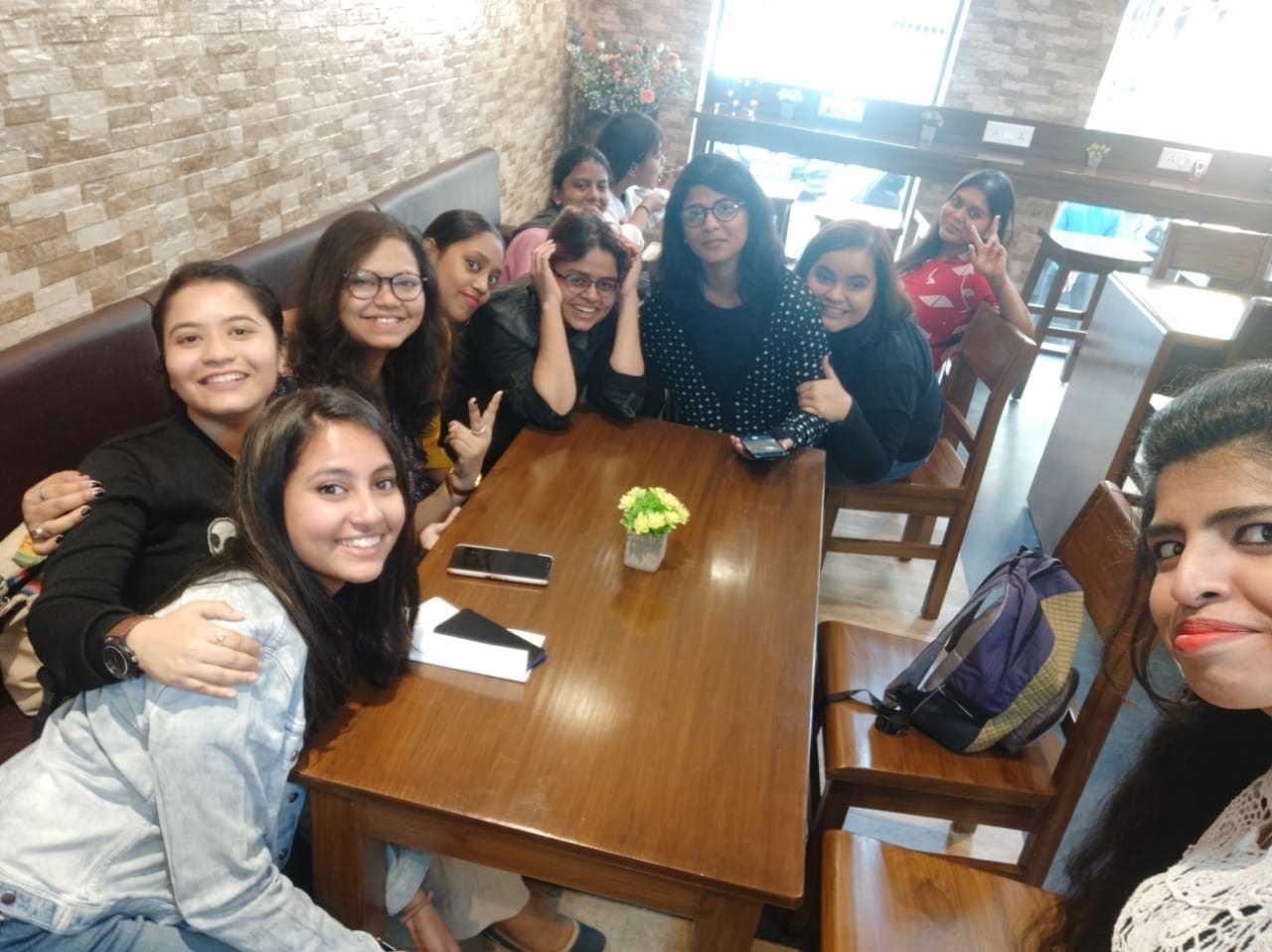 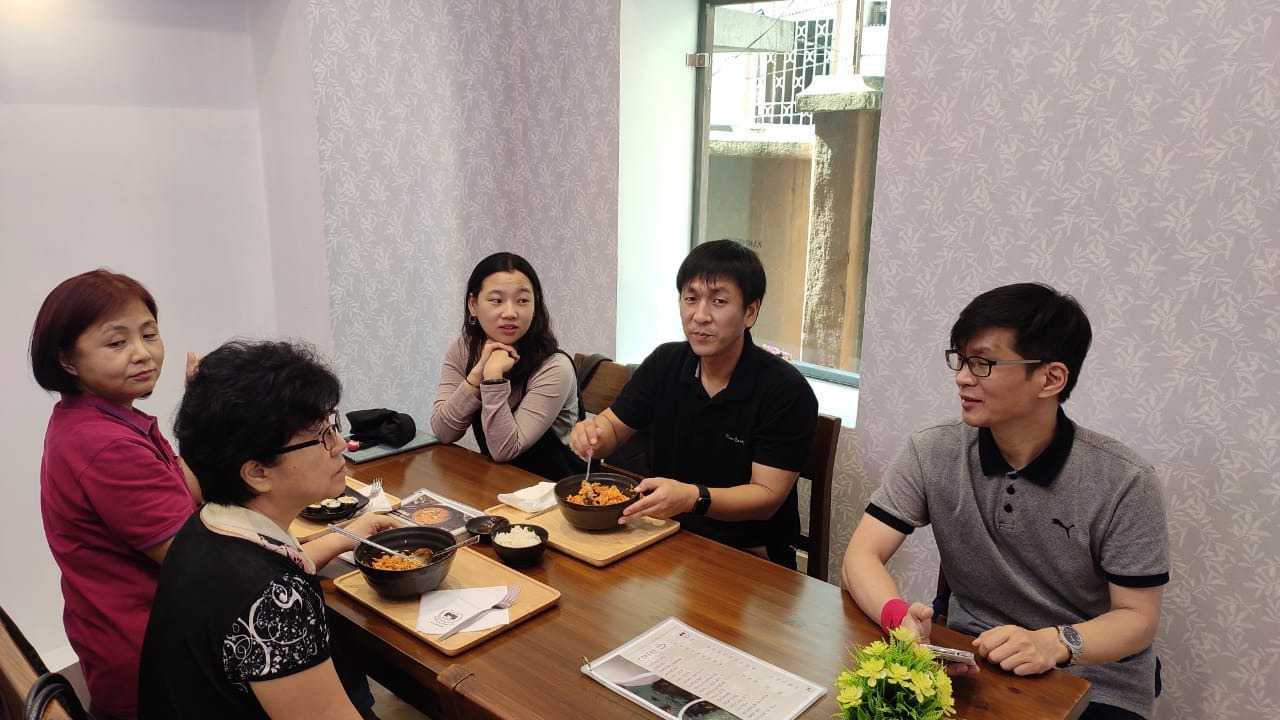 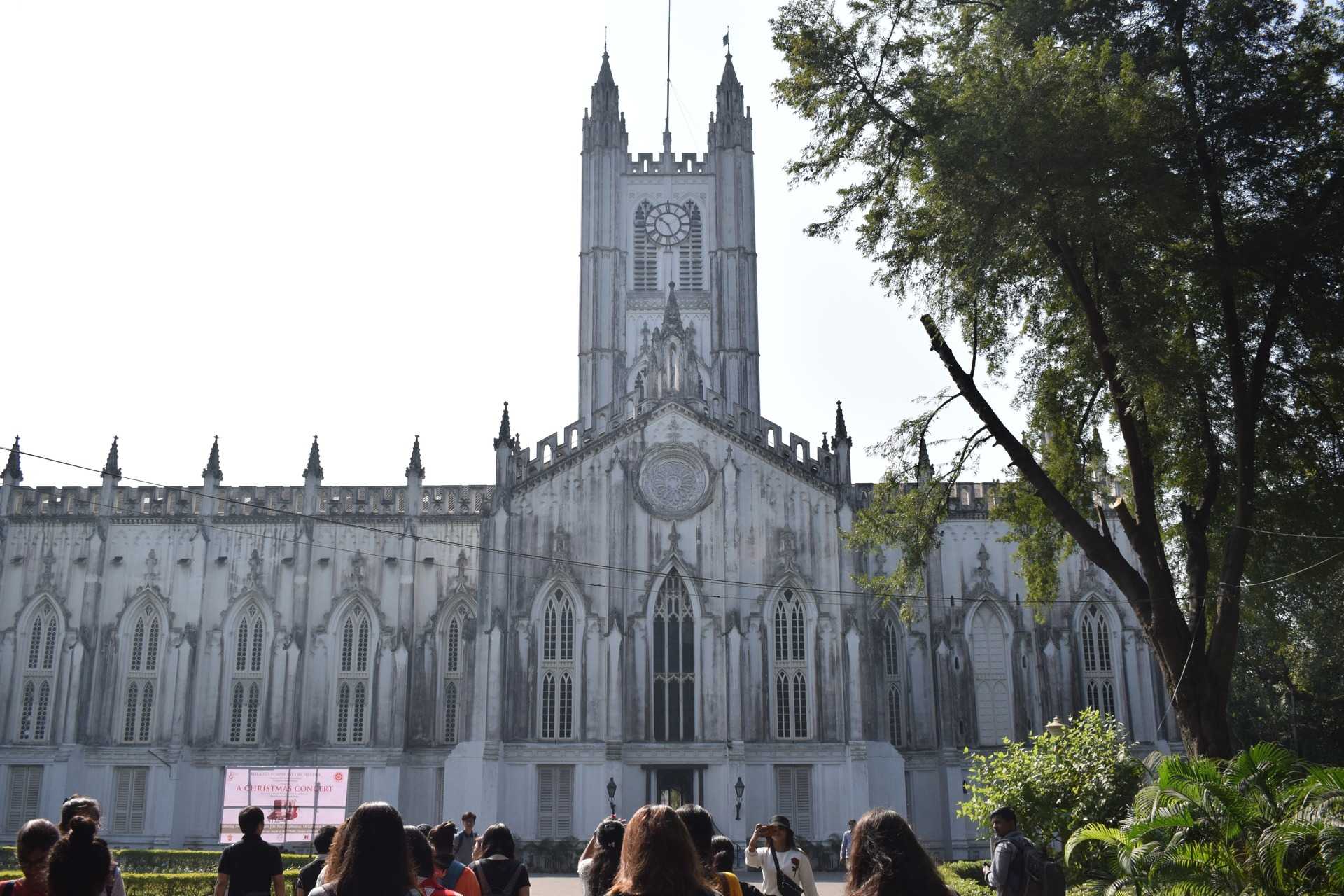 A day trip to St. Paul’s Cathedral Church and King’s Bakery’s second outlet at Park Circus was arranged by SAYUL in India team(led by Baishakhee Chakraborty) along with Shirsha Singh's team for Korean residents living in Kolkata. With Christmas almost dawning upon us and winter just starting to lay its seeds in the weather of Kolkata the ancient church with its Gothic architecture and located at the heart of Kolkata in Park Street serves as the best location for a day outing for everyone and anyone. The church is the largest cathedral in Kolkata and the first Episcopal church in Asia. The Anglical church serves as the seat of the Diocese of Kolkata. One can roam the church grounds and the gardens attached to it to take in the beauty and the peace the environment offers. 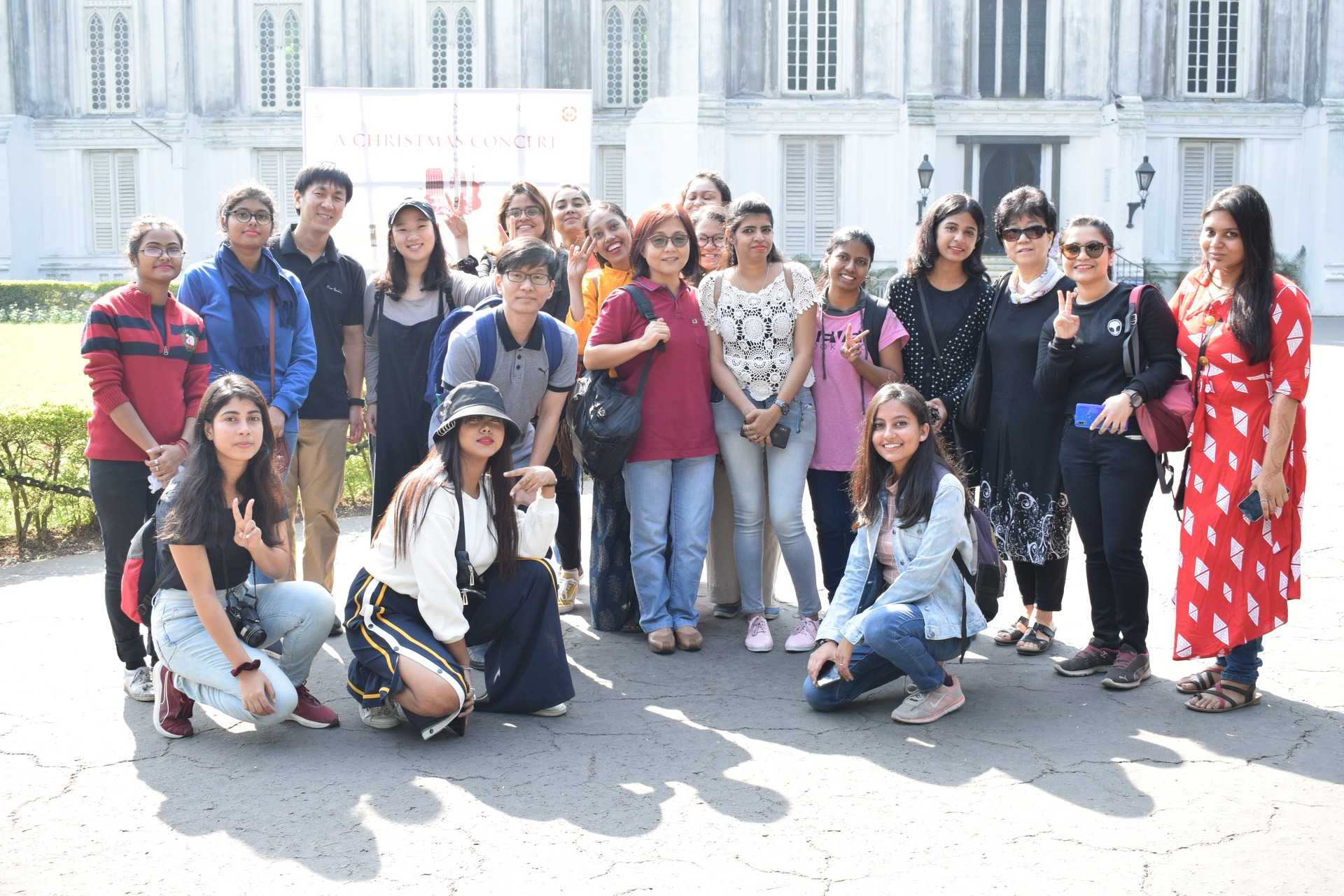 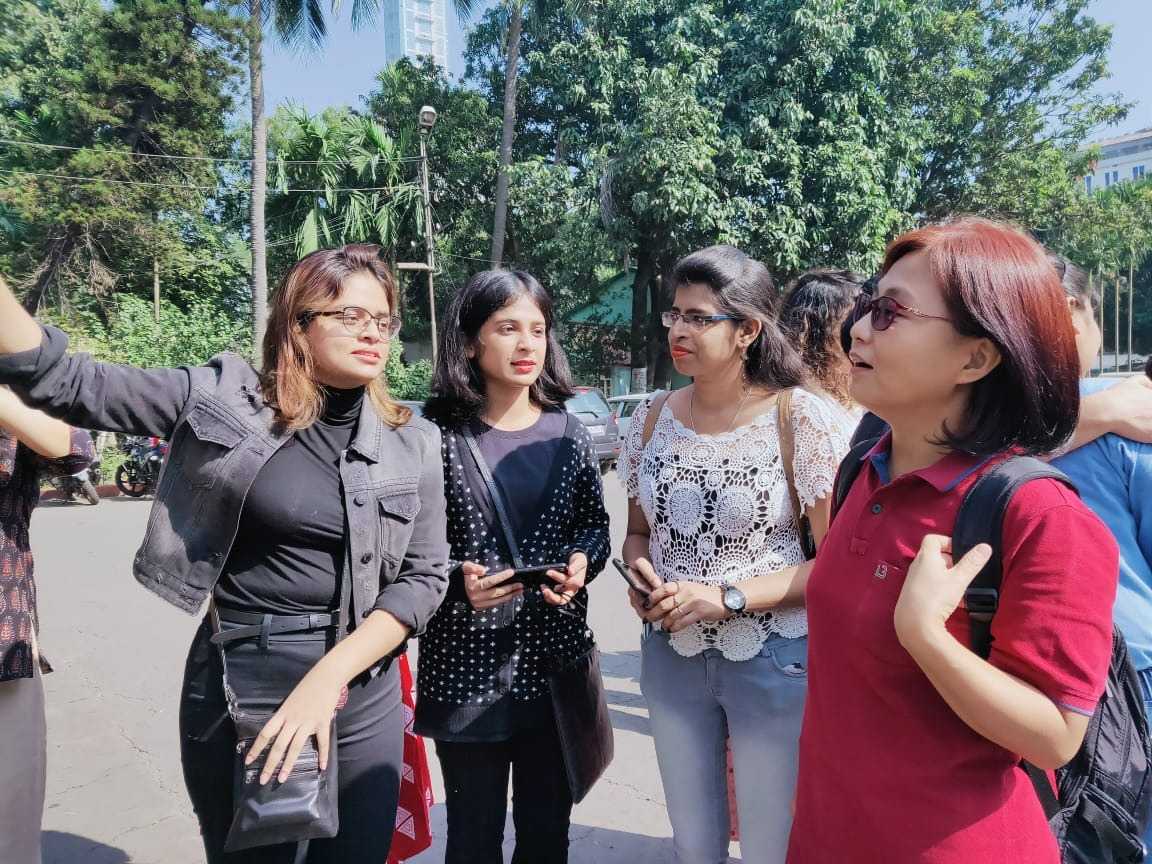 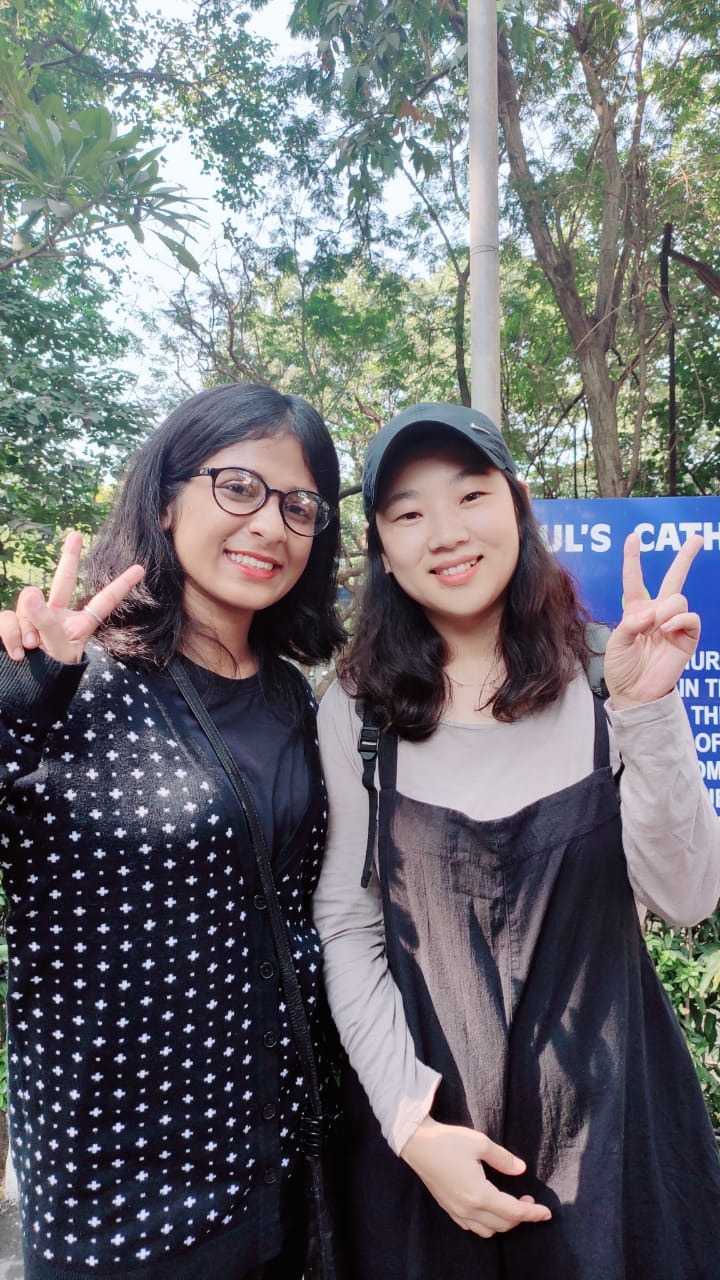 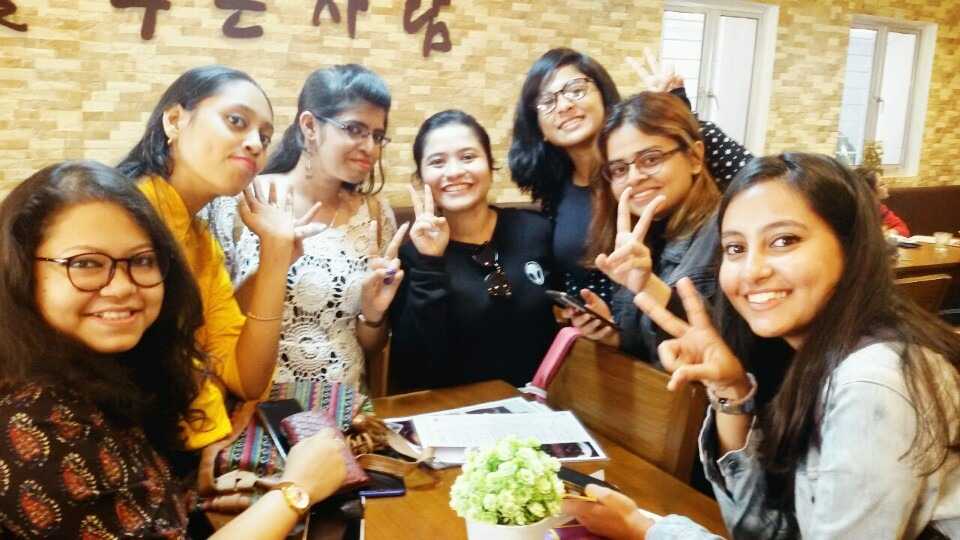 Our SAYUL in INDIA Team at King's Bakery 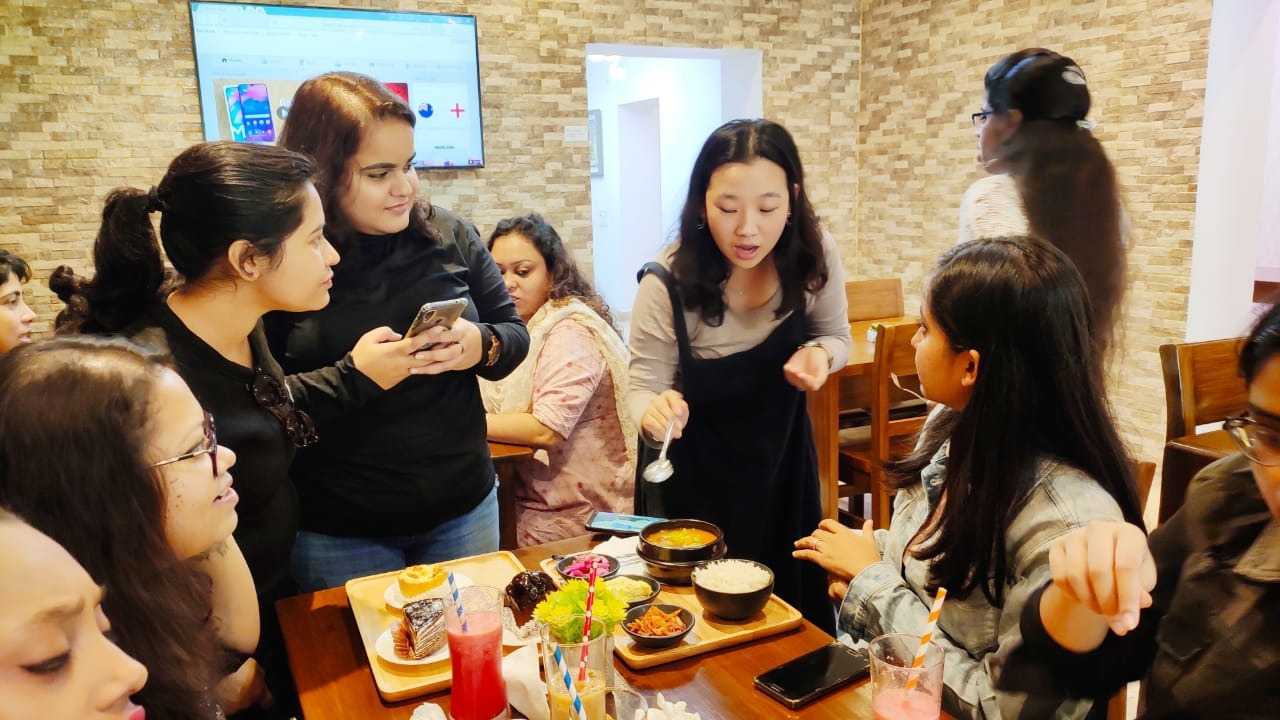 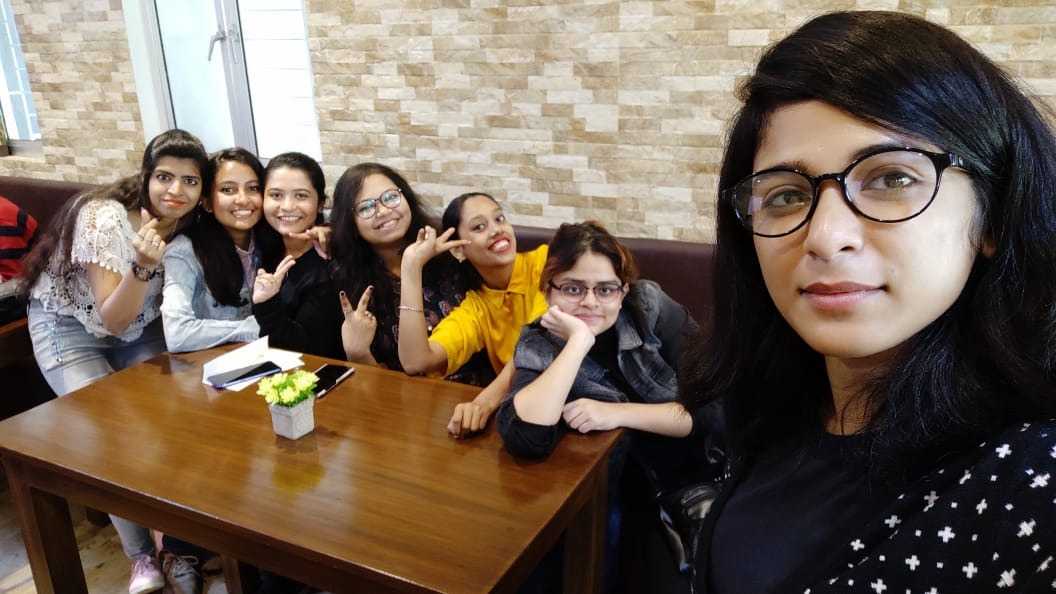 When you start out as a team, but you turn into a family❤️

Short Explanation: We planned a trip together with our SAYUL members to King’s Bakery. We discussed many things related to Korea like Korean traditions and culture, Korean history, Korean lifestyles, Korean entertainment industry Korean foods and much more. I would like to give brief information about the King’s Bakery. King’s Bakery is a restaurant where we can get authentic Korean cuisines in Kolkata. It has been 3 years since its set up. The place is run by Seok Jung and his wife, Sojin Lee. The article is for the new outlet of King’s Bakery located at AJC Bose Road, Kolkata. 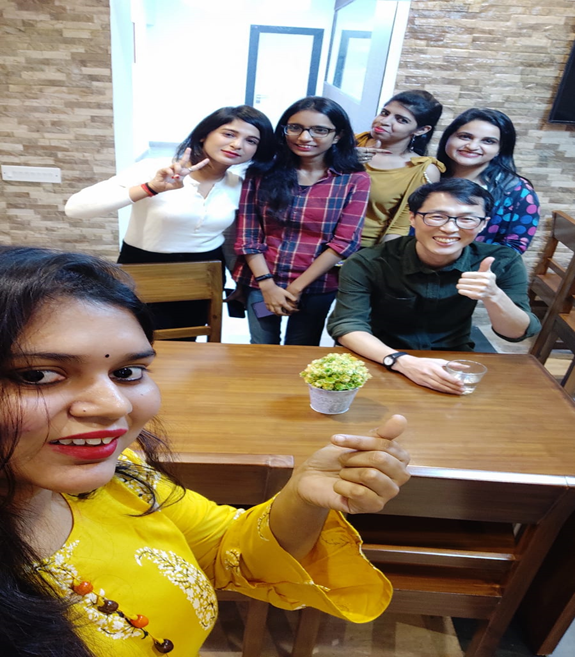 Short Explanation: "A little kindness can take us a long way”: A Movie Day at Korean Culture and Language Centre 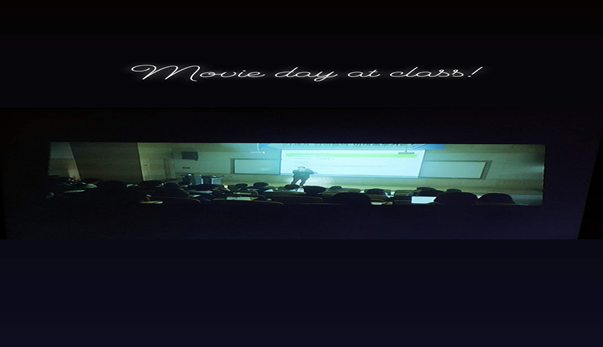