Short Explanation: a brief history about tow Big Generals in history of world

Both are the biggest generals in the world but I think not many people know them but for sure they know Genghis Khan and Cyrus the great or even Caesar. Those generals mentioned above are big enough for the works and actions which they did for their country. 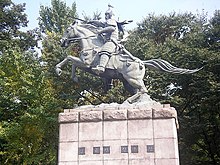 General Kim yu-shin (김유신).[1] was born in 595 A.D. in Silla kingdom. When he got 14, he became Flowering Knights, it was a place who a group of youth males gathers together to study culture and religion like Korean Buddhism. Then at the age of 34, he became a total commander of Silla. He did such big things in the Korean peninsula. The biggest feature is the unification of Korea. Even though lots of previous kings such as King Dongmyeong[2] and his sons of the Goguryeo dynasty[3] tried to unite Korea as one nation, they failed to do. King Dongmyeong and his sons are defeated by General Kim yu-shin. The unification of Korea was the ultimate dream that every king in the Korean peninsula had. The kings were in a fight for numerous years, but their dreams were not able to become true. Korea was united, however, by Kim, Yu-sin, a strong and intelligent general years after King Dongmyeong of the Goguryeo dynasty. The voyage to the unification had started: Silla broke the alliance with Baekje and attacked Baekje. Afterward, Baekje and Goguryeo became an allay and Kim Yu-shin knew that Silla needs a new alliance. Silla asked for help from Tang. General Kim yu-shin helped Tang take Baekje, and Silla and Tang attacked Goguryeo in north and south. Silla and Tang finally took all over Korea. Unfortunately, however, Tang did not want to leave Korea. To beat Tang, therefore, Kim yu-shin had several wars against Tang and finally won.[4]

General Kim[5], Yu-sin died in bed at age of 79. Much of his life is mentioned in Volumes 1 to 3 of Samguk Sagi's book and the first volume of Samguk Yosa's book. His greatest legacy for Korea was the unification of the country, as he was able to defeat the senior generals of Baekje (Gibaek) and Goguryeo (Yeongaesomun), conquer Baekje and Goguryeo, and oust the Chinese rule of the Tang from the Korean Peninsula. He did a big and important work for Korea to be unified at last and to end wars between people who were one and suffering so many years from starving and killing and losing their beloved for noting. The features that Kim, Yu-sin made was big progress that Korea had in the 7th century and helped Korea to become bigger and more stable and also independent.

On the other side, Iran has a big general, Surena[6], who fought against Roman Empire. General Surena did things that show his intelligence and his military power. The name of the general is Surena or Rustaham Suren, and he was born in 82 B.C. Although he died very soon, he was very famous among Iranian because of what he did. He was from the Suren family, one of the seven famous Iranian families (during the Parthians and Sassanids). Soren in Pahlavi Persian means strong. Another letter of this family is Windeferen, who was the governor of Sistan in the first century A.D.; His territory stretched from India and Punjab to Sistan. Surena was ranked first in terms of race, wealth, and fame after the king, and due to family decency on the day of the king's coronation, he had the right to wear the royal belt. Surena put Orodes to the throne and captured the city of Seleucia, and was the first to climb the wall of the city and subdue those who resisted with his own hands.

The Battle of Carrhae

Julius Caesar, Pompée, and Crassus were the three great Roman generals and rulers (known as Triumvirate I) who jointly ruled the vast lands occupied by the Roman government. They decided to attack Iran at a meeting of Luca on October 3, 56 B.C[7]. Crassus, the ruler of the eastern part of Rome at that time; That is, it was Syria, and to expand the Roman government in Asia, it intended to attack Iran and India. Finally, Iran and Rome fought somewhere in Current Turkey, and the battle between the two nations has been named the Battle of Carrhae[8]. Roman officers reported their defeat of Iran to the Roman Senate: Surena, the commander of the Iranian army, used new tactics and weapons in the war. Every Iranian cavalryman carried a small musk of water with him and did not feel thirsty like us. Water and ammunition were delivered to the infantry with muskets loaded on the camels. The Iranian soldiers took turns leaving the square specially and resting. Iranian riders have the ability to shoot from behind. The Iranians invented new bows with which they were able to strike the feet of our infantrymen, who had built a defensive wall against them with large shields to protect our riders. The Iranians had double-barreled rifles that were fired continuously with a new machine up to long distances. Their swords were not fragile. Each unit used only one type of weapon and did not weigh itself as much as we did[9]. The Iranian soldiers did not give up and fought to the last. It was that we were defeated, lost seven legions completely, and suffered heavy casualties in the other four legions. The Battle of Carrhae, the first war between Iran and Rome, has great importance in history because the Romans suffered a major defeat between the two sects after successive victories for the first time in a battle near Carrhae. This war ended for Rome at the cost of twenty thousand killed and ten thousand captives.

Surena and his wife Vishka two times saved the life of Farhad IV, King of Iran, from Roman assassination; who died a second time and were killed by Roman mercenaries. He had 31 and he died when he was young contrary to Kim, Yu-sin who died in 79[10]

Surena and Kim, Yu-sin cannot be compared because it was about big empires and the Korean peninsula but both were so smart and they did impossible things that make them the best generals both countries had in history. They both had a big knowledge of fighting with the least warriors but with great tactics that their enemies did not experience before. Also, both generals did things that the kings could not do for many years. Their bravery, intelligence, decency, and their efforts to defend and develop their country deserve praise and respect, although the two are very different in what they did and also in how much they lived. The talent and originality of the family, both generals had the same features, and the actions that the generals did as if they were clever and wonderful made these two generals the best on the planet and immortalized their names.

2. Yershman, The Parthians, Iran from the Beginning to Islam, translated by Mohammad Moin

Short explanation: The Gimnyeonggul Lava Tube, located in  Jeju City, is one of the World Heritage Sites in South Korea ...

Short explanation: We added "Charye" as one of the several kinds of ancestor rituals, to jesa. Charye is a memorial service for one's ancestors that is performed during Seollal (Lunar New Year's Day), Chuseok (Korean Thanksgiving Day) and other traditional Korean holidays.

Short explanation: Jesa is a ceremony commonly practiced in Korea. Jesa functions as a memorial to the ancestors of the participants...

Topic: The Ministry of Economy and Finance (South Korea)

Short explanation: The Ministry of Economy and Finance (abbreviated to MOEF) oversees the financial policies of the South Korean government.

3. Short Explanation: The Sansa are Buddhist mountain monasteries located throughout the southern provinces of the Korean Peninsula. The spatial arrangement of the seven temples that comprise the property, established from the 7th to 9th centuries.

24
WIKIPEDIA
[SAYUL in Iran] Ministry of Culture, Sports and Tourism

3. Short Explanation: this article is about the ministry of culture, sports and tourism of South Korea and its goals

23
WIKIPEDIA
[SAYUL in Iran] Ministry of Trade, Industry and Energy